When you introduce the practice of collaborative innovation to your organization, you make the case to your colleagues that the approach will benefit them more than the status quo. Why might they agree with you? Have you developed your campaign of persuasion?

Innovation architect Doug Collins shares his thinking on how you might influence people to share your beliefs about the benefits of the practice.

Influence: The Psychology of Persuasion

In his book Influence: The Psychology of Persuasion, Robert Cialdini shares his views on why we make certain choices and hold certain beliefs. Why, for example, do we more deeply embrace a point of view when we perform the physical act of committing that perspective to paper?

Dr. Cialdini’s insights offer, too, intriguing approaches for persuading your colleagues to embrace the practice of collaborative innovation.

Dr. Cialdini organizes his thinking about influence in six categories: Reciprocation, Consistency, Social Proof, Liking, Authority, and Scarcity. I explore two categories that seem most in tune with the practice of collaborative innovation. For each I suggest an experiment that you, the practitioner, can try with your community to see whether pulling the given lever of influence yields positive results.

Figure 1: applying the six levers of influence to your collaborative innovation practice 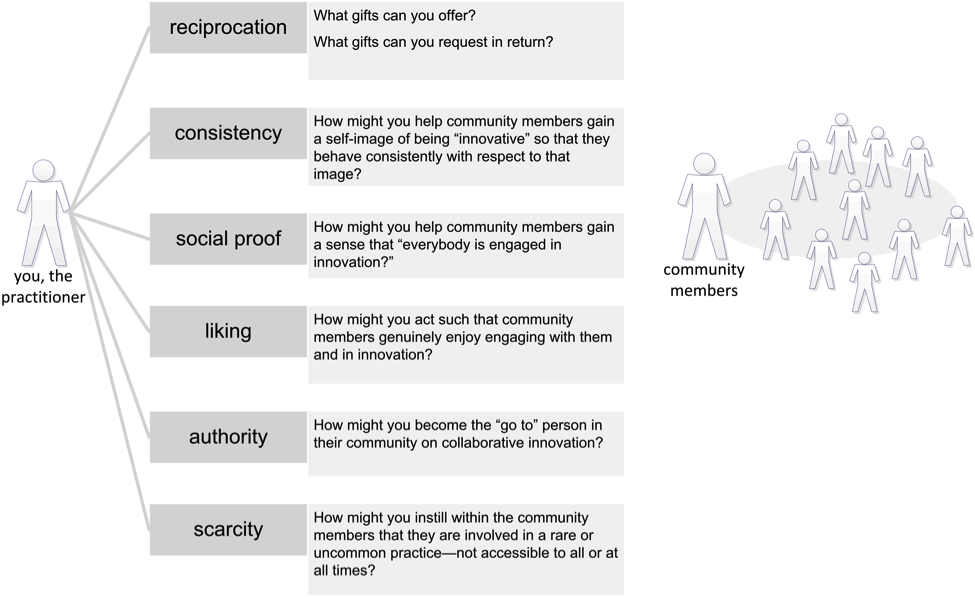 Your experiment. Identify five influential people in your community who have yet to participate in collaborative innovation. Give each of them in person a small, yet relevant gift—for example, a copy of Daniel Pink’s Drive. Later in the week, approach each person again. Tell them that you are helping to manage a collaborative innovation campaign. Ask them if they would be willing to contribute as many ideas as they can over the next day.

Likewise, approach five influential people in your community who have yet to participate in collaborative innovation. Give them nothing. Ask them if they would be willing to contribute as many ideas as they can over the next day.

Did you see a difference in behavior between your experimental and control groups? What happens if you give a new experimental group in a second round of tests a gift of no consequence, such as a pencil?

Description. Dr. Cialdini writes of a sociological study to find how we might encourage people to conserve energy at home. In the first instance, researchers called a set of homeowners and shared with them tips for conserving energy during the winters. In the second instance, researchers called another set of homeowners with the same tips. In the second instance, however, the researchers told the homeowners that the sponsoring group would publish the names of the households that saved the most energy during the current heating season in the local newspaper as “conservation heroes.” Interestingly, the researchers followed up with the second group of homeowners midway through the heating season to tell them that, for whatever reason, they would not be able to publish their names in the newspaper.

Dr. Cialdini writes that the researchers behind this study found that the first set of homeowners did not change their conservation practices. Simply conveying seemingly useful information to them had no effect. The researchers found, however, that the second set of homeowners significantly reduced their energy usage during the heating season, even when they were told that their names would not be published as “conservation heroes.” The researchers and Dr. Cialdini found that the second group, in being told that they would be recognized, developed a new perspective of themselves as conservationists. This perspective remained intact—and, in fact, carried forward for the longer term—even when the researchers removed the initial catalyst, the chance to be publicly recognized.

Your experiment. Practitioners at times struggle to get community members to comment and collaborate on ideas that their peers contribute. Identify one set of ten community members who have not commented or otherwise collaborated on ideas that their peers have contributed. Meet with each one. Explain the community benefits of collaboration. Give them tips for doing so. Identify a second set of ten community members who have likewise not commented or collaborated. Give them the same tips. Further, tell them that if they agree to collaborate then you will publish their names in the community or organizational newsletter as “collaboration heroes” in sixty days. Following the study that Dr. Cialdini describes, return to the second group after thirty days and tell them that you cannot publish their names.

Dr. Cialdini’s Influence is a useful resource because he reminds us that people do not always decide to do things based on logic.

We can use his insights to help people experience new practices, including the practice of collaborative innovation.