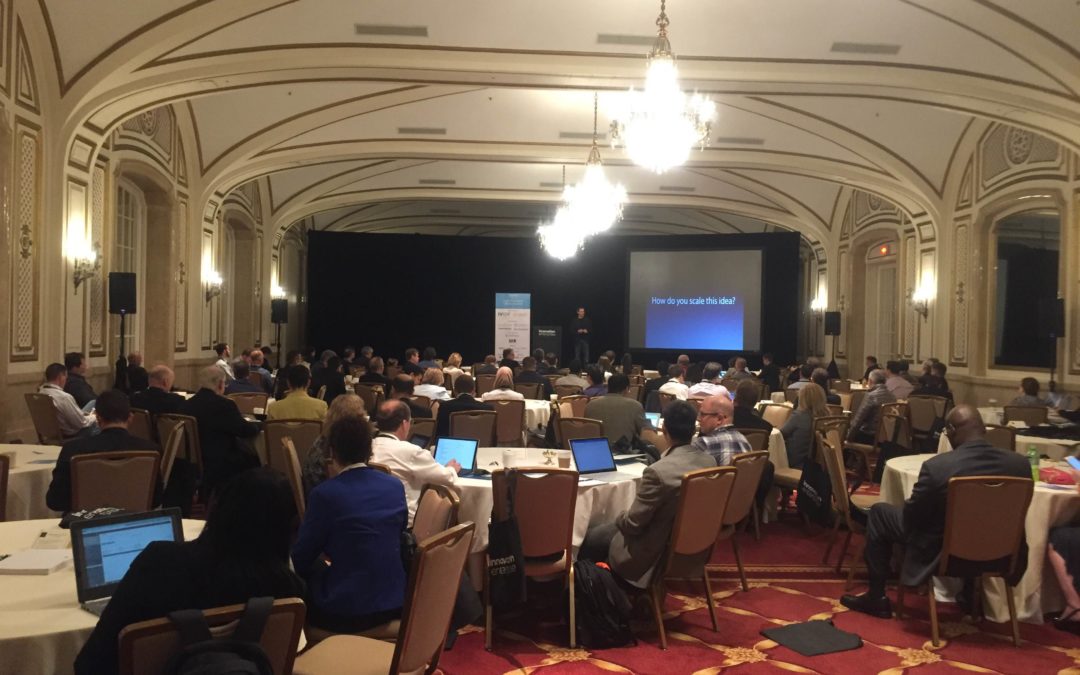 Hundreds of innovation practitioners from different industries and with varied levels of experience came together for two-days of learning and sharing.

The likes of Google, Qualcomm, Boeing, and Wells Fargo were among the diverse set of brands in attendance – and of course Spigit was there as Gold Sponsor.

As you can imagine with any conference about innovation, there was no shortage of interesting insights, perspectives, and stories.

In this article, we share our top innovation takeaways.

Creating a culture of innovation remains high on the priority list for companies in all industries. This was apparent by how many times it was brought up during presentations.

In Spigit’s recent 2016 crowdsourced innovation benchmark study, we uncovered the same realization. In fact, 93% of the companies surveyed in the study said it’s their primary innovation objective.

But turning your culture into one that lives and breathes innovation doesn’t happen by flipping a switch. There are more pieces to the puzzle. And they all have to fit together for it to work.

Luckily, there’s one thing that can help build to this change: incremental innovation.

While ‘breakthrough’ or ‘disruptive’ innovation makes big splashes in the media and gets you on the cover of Forbes magazine, incremental innovation is the unsung hero when it comes to transforming a culture. And, unlike growth innovation, it happens more frequently, with typically shorter-term results.

As the old saying goes: you have to crawl before you walk. By embracing and celebrating incremental innovation, you’re taking the necessary steps to establishing the right mindset and habits for your culture.

How do you create habits? By doing something over and over again until it becomes second nature. If you want to create a culture of innovation, your company needs to continuously innovate. A straightforward way of doing this is to start incrementally.

Ideas are great. In fact, you probably have hundreds of ideas every single day. But the hard truth is that it doesn’t matter how many ideas you have.

The only thing that matters at the end of the day is execution. In other words, what did you actually implement?

When it comes to crowdsourced innovation, Implementing ideas – whether it’s from your employees or customers – is what keeps people engaged. They are spending their very valuable time giving input, and if it appears that nothing is being done with this then people will quickly lose interest.

This is a crucial  factor in the creation of a culture of innovation. It should be engrained in the company and you need to communicate that everyone, no matter experience level or position, has the power – and opportunity – to create the next big thing for their company.

This buy-in from employees is what sparks enthusiasm around innovation. It’s what separates the Googles and Facebooks of the world from everyone else from an innovation standpoint.

Culture is different per generation

One interesting nugget that came from an early morning session was the importance  of understanding your employee base in terms of generation.

Every generation has different cultural values.

That’s not to say you should try to make your culture fit one generation over another. It’s more about being flexible and nimble enough to play to your company’s strengths.

Don’t force a certain segment of your workforce to fit in a box they’re not comfortable being in. This only silos people and disintegrates the culture you’re working hard to build.

Not every innovation will be a home run. Sometimes you’ll swing and miss. But with every miss there’s an opportunity to learn something that could impact your future at-bats.

Baseball analogies aside, the more times you attempt to innovate — whether that’s growth or incremental — the higher your chance of hitting that home run.

Have you ever looked at a new product or service and thought, “Why didn’t I think of that?”

Often times the real potential of an idea doesn’t reveal itself until it’s refined. A good example of this is the seat belt.

Seat belts were invented in the 19th-century by English engineer, George Cayley. The idea was refined in 1885 by Edward J. Claghorn who was awarded a U.S. patent for a safety belt that secured a person to a fixed object. It wasn’t until the 1950s that the first 3-point seat belt was established and seat belts became standard in vehicles, which revolutionized automotive safety.

A more modern example of idea refinement is Facebook.

What started off as just a social network for Harvard students soon reached every college and university in the United States before opening to the public. Not long after, it became one of the top technology companies and innovators in the world.

The point is, a transformational idea won’t always be obvious from the start. But if it provides value, with a little refinement, it can become that next thing that transforms people’s lives or an entire industry.