While the centuries-old phrase “no news is good news” still has some value today, there are situations when this guidance isn’t just inapplicable, but it’s categorically dangerous. And in enterprises around the world, the best – or rather, the worst – example of this involves conventional project management software.

Here’s the thing: most employees don’t formally declare how much they HATE the conventional project management software that has been inflicted uponConventional Project Management Software them. Why the suppressed fury? It’s because over the years, employees have seen plenty of colleagues get labeled as “bad team players” for escalating their concerns, and they aren’t in a martyrdom mood. They figure the most practical way forward is to put their heads down, tolerate the terrible software as best as they can, and hope that sooner or later The Powers That Be will see what’s really going on and make a long overdue change. 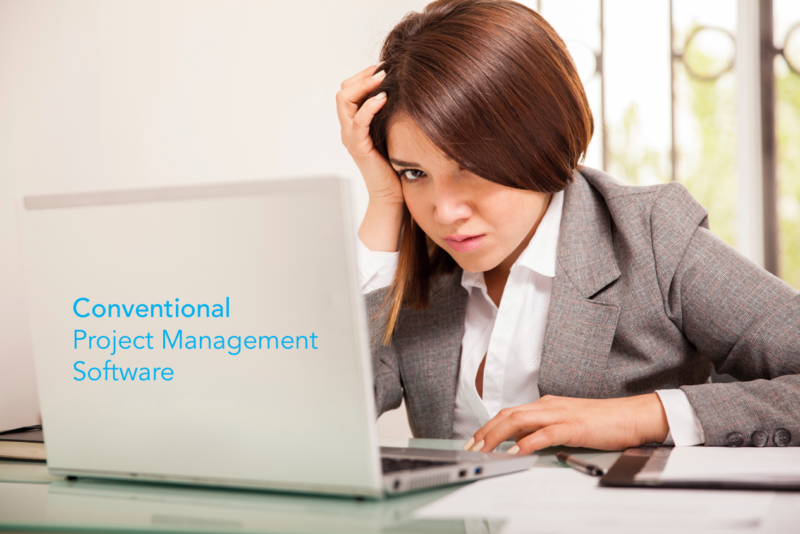 However, complaints and criticisms through informal channels – such as Tweets, LinkedIn discussions, blog comment sections, expert-to-expert forums, and so on – are a whole different story! Liberated by being on personal time vs. company time, and emboldened by peers who are more prone to empathize rather than attack, employees are colorfully describing the depths of their dislike for conventional project management. Below, we highlight the 5 biggest causes of their agony:

The Costs of Quiet
For enterprises that are using (or rather, being used by) conventional project management software, the price of “no news is good news” thinking is severe. Just because employees aren’t jamming the Suggestion Box with complaints doesn’t mean that everything’s fine. On the contrary, because of the issues above, project and programs are probably underperforming, employees and customers are likely frustrated, and the competition is either gaining ground – or increasing their lead. Fortunately, there’s a way out of this spiral: step up to Clarizen!

Clarizen: Win the End User FIRST
Clarizen’s revolutionary win the end user FIRST approach is built around how individuals, workgroups and teams actually “get work done” in the real world by. Through a suite of robust, yet easy-to-use tools, Clarizen helps enterprises eliminate work chaos, gain real-time visibility into processes, create high-performance teams, flexibly configure (and re-configure) the system to match their environment, and get up and running quickly.

Add it all up, and it’s easy to see why Clarizen’s adoption, usage and satisfaction rates are astonishingly high, and why employees around the world are relying on it to do the unthinkable: turn their project management software hate into love.

Learn More
To learn more, take a product tour, live demo, or start a free 30-day test drive where your teams can build and manage live projects in your environment, and across your enterprise.