At last check, there are about 25 million web pages offering some kind of team building advice. Throw in a few million ebooks and videos, and it’s safe to say that this topic isn’t just “well covered,” but that it’s outright enclosed. Well, it is in theory. 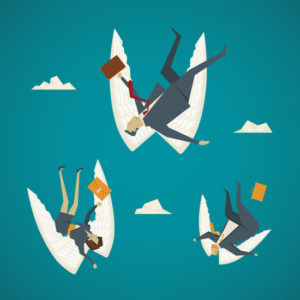 In practice, however, despite the proliferation of team building wisdom (note: there’s probably another hundred thousand web pages to check out since you started reading this article), the rewards continue to elude many supervisors, managers, leaders, and other enterprise team builders.

What’s more, the problem isn’t typically a lack of intent or effort. Many enterprises invest significantly in team building initiatives, training and tools – only to find that the gains, if any, are superficial and short-lived. In some cases, they can even backfire as employees become even more disengaged and cynical after the investment than before (“Oh great, more team building, wake me when this is over”).

In truth, these chronic, frustrating team building difficulties can often be traced back to a series of four anti-team building obstacles; any one of which can severely demoralize a workforce, and send it spiraling downward:

Few things fill employees with more dread than pointless status meetings. Indeed, a recent Planview AdaptiveWork survey conducted by Harris Poll found that employees waste up to 30 percent of their work week preparing for status meetings, and 74 percent do something other than listen or talk during status meeting conference calls, such as eat lunch, respond to emails, and even use the restroom (another reason the mute button is one of the greatest inventions of all time).

2. Plenty of Silos and Islands

Rather than collaborating, sharing, and exploiting all available knowledge capital, employees who have access to silos and islands of activity will invariably head towards them and set up camp – not because they’re disgruntled, but because it’s where they feel safe and secure. Unfortunately for them and for everyone else, the consequences of isolation trigger a litany of problems that keep managers and executives up a night: project and program underperformance, cost and schedule overruns, resource misallocation, recruitment and retention woes, angry and soon-to-be-ex customers, and so on.

3. Lack of Visibility and Transparency

Trust is the basic building block of any relationship – whether it’s in the workplace or anywhere else. But at the risk of irking high school English teachers out there, trust in terms of team building is better grasped as a verb than a noun. It’s not just a “thing” that exists or doesn’t, but rather an active force that must be constantly supported by two pillars: visibility and transparency. The former ensures that employees have the perspective and clarity they need to know where they are in relation to others and the whole. The latter ensures that employees can see how and why steps are taken and decisions are made.

For decades, employees have repeatedly demonstrated that they don’t like and won’t use conventional project management software. And why would they? It’s needlessly complex, inflexible, doesn’t integrate with other systems, and imposes “one-size-fits-all” processes and workflows that, ironically, don’t fit anyone. It’s not a solution, but a source of problems. Employees who refuse to use it (or use it as little as possible) aren’t being difficult or “bad team players.” They’re being rational and protecting their sanity.

And on top of this, Planview AdaptiveWork is refreshingly easy to use, and brings teams together as part of a unifying purpose, regardless of whether employees are working in the same office, or located on different sides of the world.